The act was supported by many prominent Americans, including Fred Rogers (“Mister Rogers”), one of the founders of NPR and creator of All Things Considered Robert Conley, and Senator John O. Pastore, then chairman of the Senate Subcommittee on Communications, during the House and United States Senate hearings in 1967. 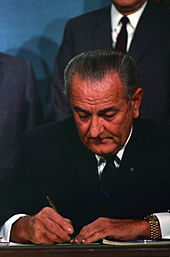 When President Lyndon B. Johnson signed the act into law on November 7, 1967, he described its purpose as:

It will give a wider and, I think, stronger voice to educational radio and television by providing new funds for broadcast facilities. It will launch a major study of television’s use in the Nation’s classrooms and its potential use throughout the world. Finally — and most important — it builds a new institution: the Corporation for Public Broadcasting.”[3]

The act was originally to be called the “Public Television Act” and focus exclusively on television, worrying supporters of public radio. However, in a sudden change of fortune, Senator Robert Griffin suggested changing the name to the “Public Broadcasting Act” when the bill passed through the Senate. After several revisions, including last-minute changes added with Scotch Tape, the law signed by Johnson included radio. This set the path for the incorporation of National Public Radio (NPR) in 1970.